For months I watched with envy all the great deals on electric cars available through Drive Green with Mass Energy. As an urban apartment dweller without a driveway, I figured an electric vehicle (EV) just wasn’t in the realm of possibility.

After all, leaving a charging cable stretched across a public sidewalk all night was just begging for a ticket from the city, a trip-and-fall lawsuit, or both.

But the urge to leave the gas pumps in the past kept me pondering how I could find the best electric car for my family and make charging work. I talked with neighbors who do have driveways, to see if I could park and charge at their home outlets. Some were game to try to work it out, but the complications of having to arrange sharing patterns prevented me from going forward.

Then I started to think about how many miles I drive in an average week and thus how often I’d actually need to charge.  When I realized that my average mileage per week was less than what many electric cars can go on a single charge, I wondered if I could possibly do my all of my charging at public stations.

After researching local charging stations, I was thrilled to find that I lived within walking distance of at least three public charging stations. It would be very easy to drop the car off and walk home or to work, then pick it up again when fully charged. 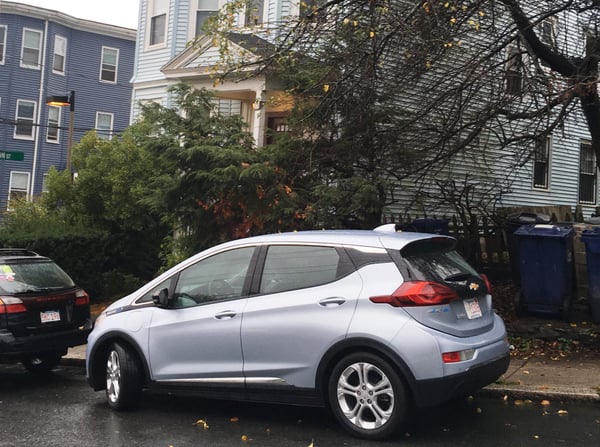 Loie Hayes' Chevy Bolt parked at home in Roxbury -- with no driveway!

I also checked my usual out-of-town road trip designations (eastern Maine, upstate New York), making sure I knew the distance between all those points and the nearest charging stations. The more I thought about my actual driving patterns, the more confident I felt that an electric car would meet my needs.

Finally in late 2017 we settled on a Chevy Bolt, which goes 238 miles on a charge, as the replacement for our loved but aging Prius. Our first out-of-town trip was to a Mass Audubon sanctuary that has a charging station. We were excited to see how easy it was to pull up and plug in.

We’ve never had a problem finding an open charging station either in our home neighborhood or on the road, using apps like PlugShare. 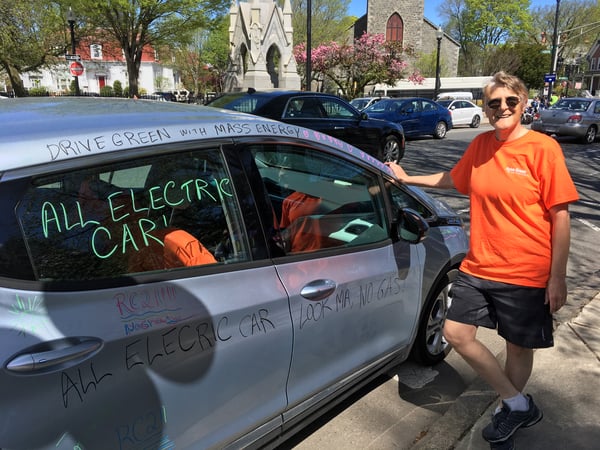 Loie Hayes in front of her Chevy Bolt to display at this year's Wake Up the Earth festival in Jamaica Plain.