Don’t Be Fooled by the Utility Spin on Energy Efficiency

“Energy efficiency is the best hedge to reduce the impact of energy costs.” [1] This, according to National Grid in a presentation given last October and aimed at explaining the record-setting electric rate increases that took effect on November 1[2].

We agree. Efficiency is the least expensive energy resources we have in the region. It’s an important solution to meeting energy needs.

Why then, did a spokesperson for National Grid recently throw energy efficiency under the bus?

Earlier this week National Grid unveiled its summer 2015 electric rate. The rate will be substantially less than what customers endured this winter, but still slightly higher than the same time last year. When asked why this is the case, a spokesperson for the utility suggested that…energy efficiency is to blame?

But efficiency is not to blame. Let’s take a closer look to better understand why.

First, in both Massachusetts and Rhode Island, utilities must meet energy needs with all efficiency and demand reduction resources that are “cost-effective or less expensive than supply.” Put another way, state laws mandate that programs to save energy must cost less than what it costs to buy new generation. And efficiency does cost less, a lot less!

Think about the cost of a new high-efficiency LED bulb. It might cost 30 cents per kilowatt hour in the first year, but after two years, 15 cents. After three years, 10 cents. After ten years, 3 cents. And LED’s last longer than that. Hmm…Three cents is a LOT less than what we pay for natural gas which, after your burn it, is GONE.

Second, take a look at these graphics made courtesy of National Grid itself, presented in the webinar mentioned above. Whether you’re a National Grid customer in Massachusetts or in Rhode Island, efficiency and renewables are less than five percent of the total bill! (This generally holds true for NSTAR and Western Mass. Electric customers too). Efficiency reduces our demand, saves consumers a lot of money over time, and even, in the short-run, has a small impact on rates. 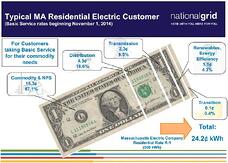 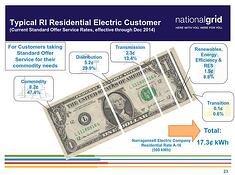 What then, is the basis for these recent attacks against efficiency? Ulterior motives perhaps.

All winter long we’ve been inundated with stories of high electricity prices being driven by insufficient natural gas capacity. And although this seems like as compelling a case as any for investing in more energy efficiency, it turns out that there are incentives in place that make building new infrastructure a more desirable approach for the utilities.

Last summer, the Federal Energy Regulatory Commission (FERC) adopted a new methodology for calculating the rate of return on equity (ROE) for electric utilities[3]. ROE refers to the amount of profit the company makes on the (shareholder) money it invests. What it boils down to is this: Although efficiency saves consumers money in the long term, and costs a fraction of what it would take to build new infrastructure, it doesn’t make much money for the utilities running the programs. Some estimate ROE on efficiency to be about 3%. Transmission lines on the other hand, and natural gas pipelines, potentially make utilities a lot of money – nearly 11% base rate of return on equity. 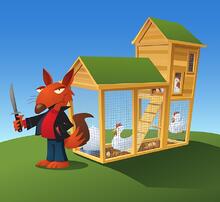 So maybe asking utilities to reduce our consumption when they benefit so much more from infrastructure investments is a bit like asking the fox to guard the henhouse.

Fortunately, while the utilities administer efficiency programs in Massachusetts and Rhode Island, their plans must be approved by state agencies. It’s up to us as energy customers and engaged citizens to make sure the utilities are held accountable and procure resources that are cost effective or less costly than new supply.

In Massachusetts an assessment of the potential for energy savings in 2016-2018 was recently released. The report was written by consultants to the Energy Efficiency Advisory Council which will be reviewing the utilities’ three-year efficiency plan. In a nutshell, the assessment indicates that we can save more electricity, gas, and oil than we are now – and that we can do so very cost-effectively. To be specific, their conservative estimate is that Mass Save can save 3% of electricity sales, and 1.5% of gas sales. By comparison, in 2014, the utilities saved 2.7% of sales for electricity and 1.33% for gas[4].

Historically the utilities have tended to overestimate the cost of energy efficiency. (See the graphs below illustrating this.) However, coming out of a winter of extremely high electric rates and heading into a summer period of reduced rates, we know that efficiency is the solution, not the problem! 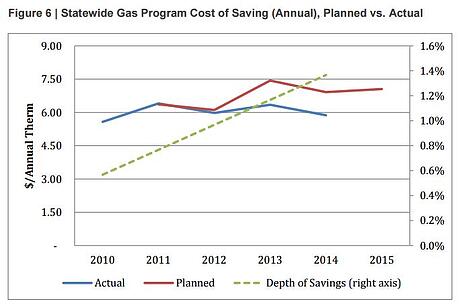 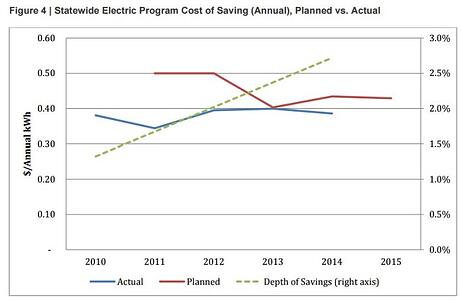 [2] National Grid’s winter rate increase in Massachusetts went into effect on November 1, 2014. NSTAR and Western Mass. Electric (both now Eversource) raised their rate on January 1, 2015. Fortunately for consumers, those rates are on the way down for this spring and summer. Actually, Grid’s rate in Massachusetts from May 1 to October 31 will be substantially less than the winter rate, but a bit higher than May through October of 2014.

[4] Preliminary estimates. Final numbers should be available in May.