How much is climate action dependent upon really big projects? 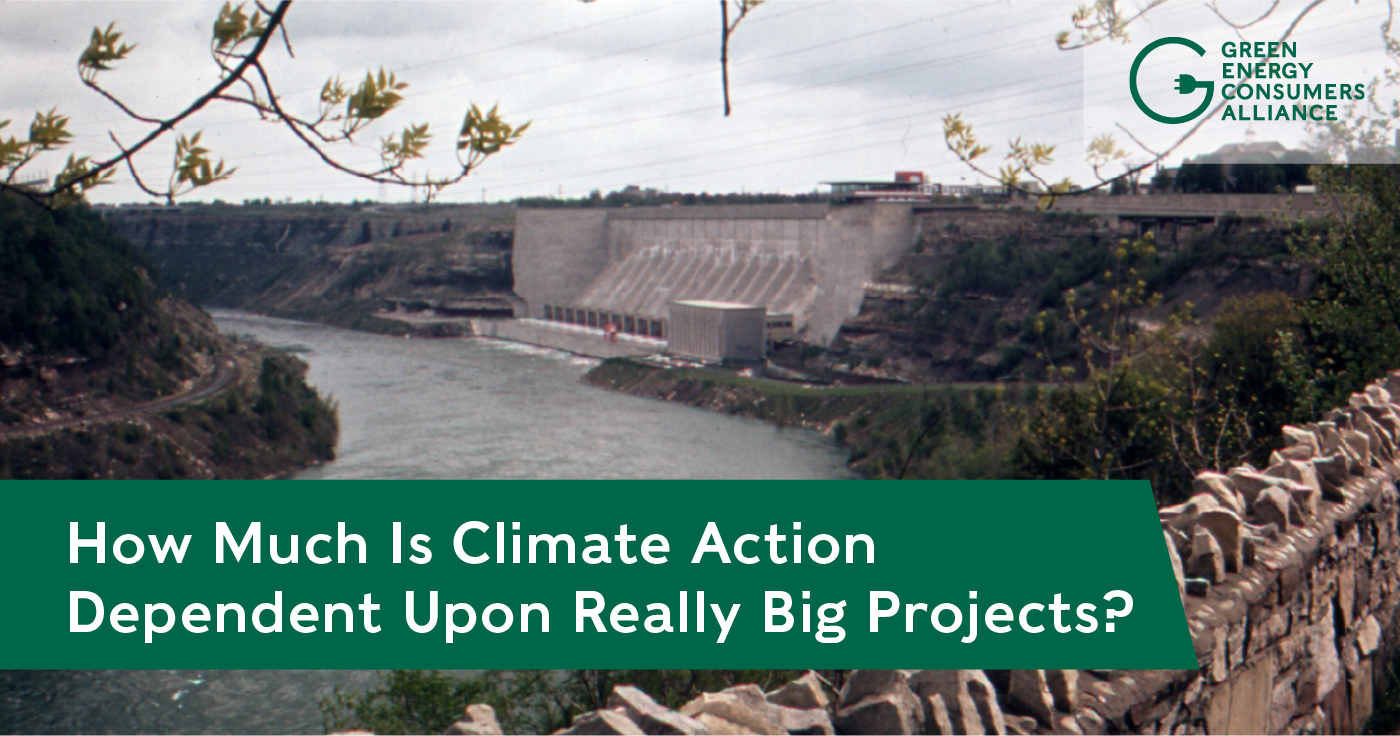 The following is the third blog in a trilogy. In early December, we explained the importance of Renewable Energy Certificates (RECs) and how they are used to quantify and track the green attributes associated with renewable electricity supplied to our grid. In late November, we explained how state renewable energy standards work to clean up the grid and reduce greenhouse gas emissions by requiring the addition of certain qualifying resources, particularly wind and solar. Another way to reduce emissions from the electricity sector is to enable electricity suppliers to purchase and deliver large quantities of hydro and offshore wind to the region. But delays could significantly undermine fulfillment of our clean energy and climate requirements.

In 2010, Massachusetts released its Clean Energy and Climate Plan (CECP) for 2020 stating that one-fifth of MA’s GHG reductions towards 1990 levels by 2020 hinged on the state’s ability to successfully procure and deliver hydroelectricity generated by Hydro Quebec. Nearly a decade later, large-scale hydro imported from Canada is still a work in progress.

Passage in 2016 of An Act to Promote Energy Diversity helped to reinforce the role of hydro imports in Massachusetts’ long term clean energy strategy and inched us closer to powering the region with generation from the north. Adoption a year later of the Clean Energy Standard (CES) by the Baker-Polito Administration further affirmed this role by creating an additional incentive for hydro-imports; because, as the 2015 update to the CECP describes it, “[a] properly developed CES could provide additional incentives and extend the existing clean energy tracking and crediting framework beyond RPS-eligible renewable resources.”

Still, opposition to the proposed hydro projects continues to contribute to delay. The highly contentious Northern Pass transmission route, proposed through New Hampshire’s White Mountains, was dealt a final blow earlier this year when it was rejected by NH state regulators. New England Clean Energy Connect is Hydro Quebec’s (HQ) alternate proposal and would deliver a huge amount of hydro to Massachusetts through Maine. It was put forth in response to the rejection of Northern Pass. Clean Energy Connect is currently under review, with a decision set to be made in spring 2019; but, it has met opposition similar to that faced by Northern Pass.

No project is without its detractors, but imported hydro has been the flash point in a regional race to decarbonize electricity supply. Strong opposition to the ecological impacts associated with construction of new dams has been raised, even by some of our closest organizational allies in the climate fight. There has been pushback against construction and siting of the transmission lines needed to move the power down, including from northern New England states and communities in Canada who would host related infrastructure to deliver clean electricity supply to meet demand in southern New England states. The “green-ness” of the power that would move along those lines has been called into question as potential for resource shuffling by HQ has been flagged. (Would the company direct non-emitting resources to our region while delivering dirty generation elsewhere?) And, there have been concerns raised that large-scale hydro imports will undercut development of local, in-region renewables like wind and solar. Specifically with regard to the CES, there is debate, even disagreement, about whether or not hydroelectricity – a well-established, mature technology – needs “additional incentives,” particularly beyond long-term contracts with guaranteed returns baked in. Nonetheless, Massachusetts’ CES was finalized in 2017 and took effect on January 1, 2018. This new requirement for non-emitting generation is in addition to the state’s RPS requirements, can include Class I resources and/or hydro, and will build to 80% non-emitting generation by 2050.

We concede that imported hydro can play a part in an overarching climate mitigation strategy. Opposition to the resource and associated infrastructure represents very real concerns that need to be addressed with any large scale project. We supported proposals for criteria to site transmission lines in an environmentally-preferable way. On the specific issue of flooding the market with cheap imports that crowd out demand for local, in-region supplies, our organization has been a leading advocate for an increase in the state’s RPS, for a more stringent CES that prioritized RPS resources over hydro, and for enabling language that allowed for the procurement of additional Class I resources instead of (or at least alongside) hydro imports.

The 2015 update to the CECP characterizes offshore wind (OSW) as a large-scale RPS eligible resource and notes that its procurement, “eventually may be necessary to achieve carbon-free electrification in the region.” “Eventually,” has arrived. The same 2016 bill that enabled long-term contracts for hydro imports included a directive to National Grid and Eversource to enter into long term contracts for large quantities of offshore wind (Section 83C); 1,600 MW to be exact. At the time, this was the largest procurement of offshore wind in the country. An Act to Advance Clean Energy, enacted in July 2018, authorized procurement of an additional 1,600 MW of offshore wind.

Requests for Proposal (RFP) for long-term contracts for wind were issued in June 2017. This past May, it was announced that Vineyard Wind had been selected as the winner to furnish 800MW of OSW. Rhode Island joined Massachusetts 83C procurement process and ultimately selected Deepwater Wind to develop a 400MW project called Revolution Wind Farm. The RFP process resulted in competitive prices for the generation, too.

Assuming it meets development milestones, including critical 2019 deadlines needed to qualify for necessary tax credits, Vineyard Wind is projected to come online in spring 2022. Revolution Wind is expected to be online in 2023.

Even OSW has drawn opposition. Most recently, the Coastal Resource Management Council (CRMC) granted an extension to Vineyard Wind through January 28th to address concerns raised by the state’s commercial fishing industry. Meeting 2019 deadlines are critical to success of the project. Hopefully, all parties will find their way to a mutually agreeable outcome before a bump in the road turns into a major setback. We strongly support OSW, but as with the opposition to hydro, we are reminded of one unintended consequence of both the Energy Diversity Act and the Act to Advance Clean Energy: without local, in-region clean resources, we will fail to effectively mitigate climate change, especially if these large projects are in anyway delayed or fail to materialize. Timely investment in onshore wind and solar, which are being impeded by large-scale procurements, is needed, too. We are aware, for instance, of wind and solar projects below 30 MW at less than 9 cents per kWh – an excellent price. But they are crowded out by market expectations and legislative advantages given to hydro and OSW. In other words, to reach our greenhouse gas reduction targets, we need all projects great and small, and we cannot let delays in the construction of the mega-projects prevent us from meeting those targets.

As a final note that probably should go without saying, we are not going to meet our climate targets just by adding more renewable energy to the electricity sector. We’ve got to use less energy wherever we can and shift transportation and space heating from fossil fuels to this greener electricity supply.