Timmons Roberts: The greenest thing to do

Guest blog originally posted in the Providence Journal on Nov. 13, 2015.

Last summer, I took about five minutes and switched my electricity from National Grid’s regular plan to a group called People’s Power and Light, which sources electricity from all renewables here in our own region. In those five minutes, I did more to combat climate change than perhaps anything else I do. 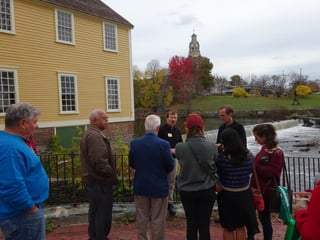 I pay a bit more each month to have one kilowatt hour of wind, solar and hydro power put into the New England electric grid for every kilowatt hour I use. It’s audited, it’s done locally, and it’s working to incentivize project developers and to push the utilities to develop bigger projects to get us off fossil fuels.

Last Saturday I got to see some of that electricity generated. At an event at the historic Slater Mill in Pawtucket, my group saw the way water power turned the complex machines the Slaters and Browns and hundreds of workers used to turn raw cotton into yarn and fabric. The giant 1810 wood waterwheel in the stone Wilkinson mill captured power enough for dozens of machines, with just a 4-foot drop in the river. Bigger mills scattered around the Pawtucket Falls used the 16-foot drop under the Main Street Bridge to the tidal part of the Seekonk.

Then we walked across Main to see the spinning generator of the Bridge Mill hydroelectric facility, which produces 4 million kilowatt hours a year, as much energy as about 3 million pounds of coal. A company called Gravity Renewables now runs the plant, seeking to keep these kinds of facilities running around New England, and refurbishing ones that need some investment.

I learned that micro hydro isn’t going to replace fossil fuels by itself, but it provides one small piece of a sustainable zero carbon energy solution for our region. This year, onshore wind reached “grid parity” with coal in some places in the U.S., and solar is closing in quickly.

Scientific studies keep piling up, showing that crazy climate impacts such as floods, droughts, hurricanes and heat waves are more intense already, even as the globe has warmed just 1.8 degrees Fahrenheit since Slater and Brown and the industrial revolution switched from hydro power to coal, oil, and then natural gas. We’re headed above 3.6 degrees unless we move aggressively now to develop a net zero carbon economy. The impacts are unknown, but they will probably drive a spiral of terrible outcomes like melting glaciers and permafrost, and fires in the Amazon and Indonesia.

Many serious estimates say we need to get to net zero carbon in the wealthy nations by 2030. How are we going to do that? In our home, we’ve taken three more steps that have gotten us probably most of the way there already. First, we had a free audit done. Then we started buying a mixed biodiesel home heating oil, also through People’s Power and Light. Third, we put a wood-stove insert in the fireplace, which we use all winter.

Electricity use is responsible for about a third of Rhode Island’s greenhouse gas emissions, and heating and cooling buildings is about another third. Transportation is the last third, another story for another day. But the spinning waterwheels and turbines at the Pawtucket hydro plant reminded me that one silver bullet isn’t going to solve this existential crisis facing our species. Rather, many small steps are going to be needed, and a lot of partnerships and creativity.

The vast prosperity that came with Slater’s first mill can be seen again in Rhode Island: the benefits of the renewable revolution are already arriving. A recent report showed nearly 10,000 jobs in green energy in our state already. There will be new technology we can pioneer in areas like tidal, wave and offshore wind energy, and thousands of local jobs installing technology developed elsewhere in insulation, installation, and maintenance. Being part of this exciting revolution took me just five minutes, in going on the web and switching over to renewable electricity. It’s the easiest, quickest, greenest thing to do.

Timmons Roberts is a professor of environmental studies and sociology at Brown University. He is on twitter @timmonsroberts.