It’ll take more than a hybrid: Transportation is moving towards electrification, just in time 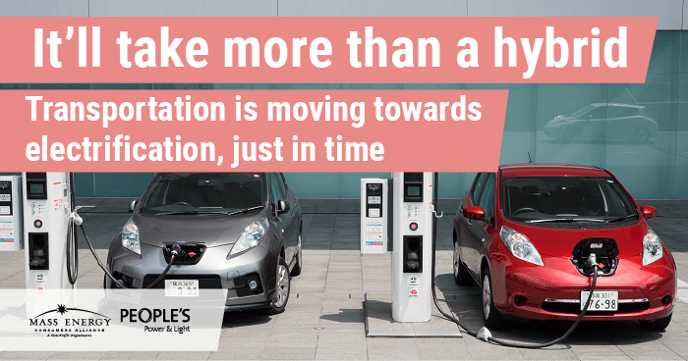 A few years ago, we bought a Prius hybrid (Larry), and a diesel Jetta (Timmons). We got great mileage on both, but we couldn’t imagine then how electric vehicles would begin to crack the last tough nut of confronting climate change and cleaning up urban air with genuinely appealing and low-cost options.

For years now, inroads on carbon reduction occurred through the electricity and building sectors, not transport.

Home insulation improved, and coal power plants gave way to natural gas, wind, and solar. But emissions in the transportation sector continued: today, they constitute the biggest source of emissions. And, as nations in Asia and South America develop, the middle class want their cars. Here in the U.S., Americans want their SUVs and trucks.

But as long as cars run on internal combustion engines, we’re falling short on the greenhouse gas emission reductions that we know are required, according to the latest scientific estimates. The venerable Prius will not get us there.

Fortunately, we can ditch gasoline entirely, plug-in our vehicles, and ride our emissions down.

Almost everywhere, running cars on electricity rather than gasoline reduce CO2 emissions greatly – even in coal-rich places like Indiana and Kentucky. Many of the new generation electric cars get an equivalent of over 100 miles per gallon. And every day, as more wind turbines are erected and solar panels are installed, the grid gets cleaner, making electric vehicles (EVs) even cleaner. In fact, the benefits from an EV purchased five or ten years from now will be even greater than one purchased today, because the grid will be cleaner, while gasoline will be just as dirty.

Renewable energy and EVs have a symbiotic relationship that is blossoming just in time to save the planet.

Renewable energy and EVs have a symbiotic relationship that is blossoming just in time to save the planet.

In the U.S., sales of electric cars are rising significantly, led by states that have signed a compact to bring over 3 million EVs to market by 2025. But in 2016, EVs were still just 1 percent of the new car market. We are lagging behind. Norway was at 24 percent of new cars, making it the leader by that measure.

In absolute terms in 2016, China sold twice the number of EVs than the US did. In cities like Utrecht in the Netherlands and Shanghai in China more than 10 percent of the cars are electric, so planners are building infrastructure and creating policies to make the transition. And some cities, including Paris and Mexico City, will be banning diesel vehicles by 2025. Norway and India are going to ban gasoline entirely by 2030.

These are bold acts of leadership, and will pay off in myriad ways. Climate change is the world’s problem, but smog is a local problem with enormous public health implications.  EVs are a solution to both. With key cities focusing on EVs, we can see how tipping points will be reached in terms of manufacturing, car-sharing, and status. This positive cultural virus is catching across the globe.

We cannot say enough about EV car-sharing and ride-sharing. Many cities are not just choking on fumes – they are choking on congestion. Electric cars have a great advantage over gas-powered cars, insofar as they can be recharged when not in use, making them well-suited for car-sharing. With car-sharing services like ZipCar, we can drop reliance on gas and pretty much drop the notion that every family needs two cars or more. Most families may not need any car, but will continue to tap car services when the need arises. Rising demand could sharply reduce the annual costs of those services, especially when compared to making monthly car payments, buying insurance, paying taxes and maintaining and fueling a private gas-powered vehicle.  Effective EV car-sharing programs exist today and will spread quickly.

When considering EVs and cities, we cannot limit our thinking to passenger cars. Electric buses are now widely available and are improving the quality of life in many places – again, especially in China. Diesel fumes from buses are major contributors to urban smog and particulates, driving severe cardio-respiratory problems in urban neighborhoods. Communities that offer clean-fueled bus fleets can make mobility accessible and clean for those who cannot afford a Tesla, or even a Chevy Bolt.

And we don’t have to stop at buses: taxis, cargo vans and pickup trucks are going electric. Municipal and private fleets can soon be nearly all-electric: Tesla is even working on electric tractor-trailers. As fleets convert, huge amounts of petroleum are displaced and emissions, both local and global, are slashed. Costs of maintenance and fueling tumble. Localities and businesses that produce electricity with renewables retain revenues and create multiplier effects on money that would otherwise got to extractive regions far away.

The cost curves are crossing

Speaking of Tesla, it makes impressive cars and has gotten attention for the “gigafactory” it built in Nevada to make battery packs. But other gigafactories are sprouting up elsewhere. With the increased supply and the learning that comes with scale, battery costs are falling faster than even solar energy. Given that running a car on electricity costs substantially less per mile than on gasoline, and given that EVs are cheaper to maintain (no oil changes, no carburetor or fuel injectors, no muffler!), as the cost of the drive-train falls, EVs are becoming cost-competitive with internal combustion vehicles, even without any subsidies.  This is yet another factor leading to the tipping point when EVs displace internal combustion.

So how do we fulfill the real potential of electric transportation?  We have to do it at every level.  In the U.S., we need to maintain strong CAFE fuel efficiency standards and progressively eliminate a few loopholes for SUVs and small trucks not being counted toward fleet averages. At the state or local level, we need more charging stations and extra incentives help. We need time-of-use pricing for electricity, so that drivers and non-drivers alike benefit from charging of their devices and cars during off-peak times. We need much smarter grids with the ability to utilize plugged in cars for filling electricity needs during peak hours—and paying owners for that service. And we need to find the political will to fund quality clean electric mass transit. All of these things would be much easier if we put a price on carbon emissions.

As we travel down the road to a prosperous future with clean urban air and a stable climate system in which to build our economy and society, we’re trading in our hybrids and diesels. The only way to arrive at our destination is in an electric vehicle.